This is an article I wrote to promote North in Watkins’ Mind Body Spirit magazine, Winter 2015-2016. It may be the most concise summary of the book I’ll ever manage. 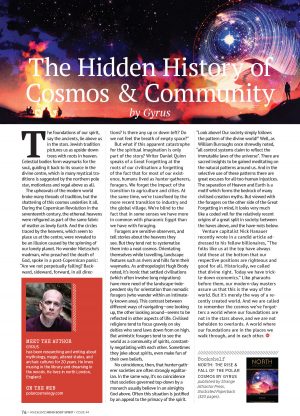 The foundations of our spirit, say the ancients, lie above us in the stars. Jewish tradition pictures us as upside-down trees with roots in heaven. Celestial bodies form waymarks for the soul, guiding it back to its source in the divine centre, which in many mystical traditions is suggested by the northern pole star, motionless and regal above us all.

The upheavals of the modern world broke many threads of tradition, but the shattering of this cosmos underlies it all. During the Copernican Revolution in the seventeenth century, the ethereal heavens were refigured as part of the same fabric of matter as lowly Earth. And the circles traced by the heavens, which seem to place us at the centre, were revealed to be an illusion caused by the spinning of our lonely planet. No wonder Nietzsche’s madman, who preached the death of God, spoke in a post-Copernican panic: “Are we not perpetually falling? Backward, sideward, forward, in all directions? Is there any up or down left? Do we not feel the breath of empty space?”

But what if this apparent catastrophe for the spiritual imagination is only part of the story? Writer Daniel Quinn speaks of a Great Forgetting at the roots of our civilisation: a forgetting of the fact that for most of our existence, humans lived as hunter-gatherers, foragers. We forget the impact of the transition to agriculture and cities. At the same time, we’re transfixed by the more recent transition to industry and the global village. We’re blind to the fact that in some senses we have more in common with pharaonic Egypt than we have with foraging.

Foragers are sensitive observers, and tell stories about the heavens they see. But they tend not to systematise them into a neat cosmos. Orientating themselves while travelling, landscape features such as rivers and hills form their waymarks. As anthropologist Hugh Brody noted, it’s ironic that settled civilisations (which often involve long migrations) have more need of the landscape-independent sky for orientation than nomadic foragers (who wander within an intimately known area).1 This contrast between different ways of navigating — one looking up, the other looking around — seems to be reflected in other aspects of life. Civilised religions tend to focus gravely on sky deities who send laws down from on high. But animistic foragers tend to see the world as a community of spirits, constantly negotiating with each other. Sometimes they joke about spirits, even make fun of their own beliefs.

No coincidence, then, that hunter-gatherer societies are often strongly egalitarian. In the same way, it’s no coincidence that societies governed top-down by a monarch usually believe in an almighty God above. Often this situation is justified by an appeal to the primacy of the spirit. “Look above! Our society simply follows the pattern of the divine world!” Well, as William Burroughs once shrewdly noted, “all control systems claim to reflect the immutable laws of the universe”. There are sacred insights to be gained meditating on the natural patterns around us. And in the selective use of these patterns there are great excuses for all-too-human injustices. The separation of Heaven and Earth is a motif which forms the bedrock of many civilised creation myths. But viewed with the foragers on the other side of the Great Forgetting in mind, it looks very much like a coded veil for the relatively recent origins of a great split in society: between the haves above, and the have-nots below.

Venture capitalist Nick Hanauer recently wrote in a candid article addressed to his fellow billionaires, “The folks like us at the top have always told those at the bottom that our respective positions are righteous and good for all. Historically, we called that divine right. Today we have trickle-down economics.” Like pharaohs before them, our modern-day masters assure us that this is the way of the world. But it’s merely the way of a recently created world. And we are called to remember the cosmos we’ve forgotten: a world where our foundations are not in the stars above, and we are not beholden to overlords. A world where our foundations are in the places we walk through, and in each other.