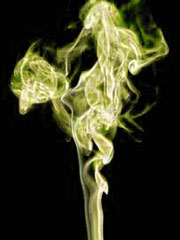 I recently gave up smoking, after 3 years of 20-a-day and 2 years of 10-a-day, interspersed with sporadic attempts at quitting. As the joke goes, giving up smoking is easy… I’ve done it loads of times.

I decided about a year and a half ago that I needed to quit. I had developed symptomatic asthma, had numerous chest infections, and wasn’t exactly rolling in cash. But I didn’t want to give up. I liked smoking. Then, when I did want to quit, it was fucking difficult.

In the spring of ’95 I gave up after getting out of breath at a rave. This habit no longer gives me pleasure, thought I, it snatches my pleasure from me. So I quit. But I knew from previous experience that it’s nigh on impossible to just stop—you have to use a technique. All the nicotine patches and gums seemed to be a rip-off, and very easily ‘misused’, so I steered clear of them, and I couldn’t afford a hypnotist.

So, being a regular meditator, I decided to use a meditation, detailed by chaoist Phil Hine. Using the Indian god-form Ganesha, who fights and overcomes obsessional demons, the meditation is very simple and brief. I won’t go into details, but the essence of the exercise is to consciously build up the craving feelings, and to intensify them to a crescendo—at which point one ‘relaxes’ into the sensations, transforming them into feelings of pleasure and power, at the same time as ‘receiving’ a word of power from Ganesha. This word is used in everyday life to reinvoke the transformation of cravings. For me, it worked like a treat.

My first real test came when I went to the pub with a friend I hadn’t seen in a long time—a situation I knew would test me. On the way to the pub, I started having those thoughts and rationalizations… I know, if I just smoke one, and then not smoke any more, then I’ll really prove I’ve given up, and show that I’m not just slavishly avoiding cigarettes because I fear them… No! That’s the demon talking… Oh, go on…

When we sat down with our drinks, the first thing my friend did was to offer me a cigarette (the demon assumes many masks…). I took hold of one, my whole world narrowing down to this singular action. My friend realized I was not supposed to be smoking, and he started laughing at the situation. I held the cigarette in my fingers—for a few seconds, I was going to light it. Then I just held it there. I told my friend about my "I’ll just have one" rationalizations, but I actually spoke to the cigarette, addressing the demon. And then I said, "But that’s just a rationalization." And put it back in the pack. Tremendous release… great surges of power and freedom.

Later that night, I was offered a spliff at a party. What the hell, I thought. I’ve shown myself that I’ve truly conquered the tobacco demon—it’s not the tobacco that I’d be smoking the spliff for… and I smoked it, relaxing into my triumph.

I smoked spliffs on and off for the next few weeks. I even cadged some tobacco to roll my own… After all, it wasn’t the tobacco I was after.

On the night of the summer solstice, in a pub, I started smoking again.

Giving up this time, I knew the score. The only way to give up smoking tobacco is to stop smoking tobacco. PERIOD. I used the Ganesha meditation again, until cravings were not very strong, and then started using it again whenever cravings got stronger. Now they’ve virtually disappeared.

But this piece isn’t just an advert for Phil Hine’s work, or a hymn of praise to Ganesha. I’d like to share what I think is a reason why so many people smoke, why it’s so hard to give up, why it’s associated with certain fatal diseases. I’m not offering this as gospel—merely an observation of mine that I think holds some validity, which I haven’t seen expressed anywhere, and may help others trying to quit.

When I gave up in the spring, I soon felt the familiar ‘irritability’ and nervous tension. But this time I began to perceive it as what I now believe it to be. The release of emotion, pure emotion. I started having feelings which seemed odd, but were actually very familiar and evocative. Strange things happened—it seemed as if my experiences were being engineered to put me through the most stressful situations, which would in turn evoke the most painful ‘forgotten’ emotions. I believe this can be seen as the smoke demon steering you into situations where it stands a better chance of gaining control of you once more. Going through stressful situations after quitting smoking, you feel at a loss, with nothing to do with your hands. Also important, I believe, is the knowledge that smoking a few cigarettes will automatically quench the unnerving torrents of feeling. I succumbed to smoking tobacco again, not through a crisis situation where I ‘cracked’ (which had happened many times before—this time I ‘rode’ the stress immediately following stopping), but by being lulled into a false sense of triumph and security. The demon reasserted itself surreptitiously, catching me with my guard lowered so far down that I didn’t recognize a rationalization when one came along.

At the time I was working with various Reichian techniques, as well as meditating. Anyone involved in meditation, or interested in Wilhelm Reich, will know that breathing is intimately connected to mind and emotions. Reichian therapists watch the depth of their patients’ breathing very closely, which usually becomes very shallow when sensitive material is brought up. By reminding the patient to breath deeply, a stronger emotional response is elicited, a deeper connection to the painful processes in the patients’ bodymind.

Most people will at least have had the experience of having to ‘catch their breath’ and consciously breath deeper when relating stressful events to a friend. Making breathing shallower is an unconscious mechanism to keep those repressed emotions at bay. Now, what else makes breathing shallower? Oh yeah, smoking. This seems to explain the paradox of smoking due to stress. Non-smokers scoff at this, pointing out that nicotine is actually a stimulant. True, but the smoke and the tar and all the crap in cigarettes constricts the lungs’ passages, and, even if you fill your lungs to capacity with air, makes breathing shallower, because the capacity is reduced. So smoking can be useful—an emotional brake-pad.

But though smoking may help some people through a particularly stressful period of their life, it’s strictly a short-term pay-off. With longer range effects like cancer and death, there must be wisdom in finding better ways of coping with stress. On the other hand, I don’t think that smoking ’causes’ cancer or heart disease. Many people smoke throughout their lives and don’t get ‘a second for every fag’ taken off their lives. So there must be another factor involved.

It’s my bet that it’s the secondary effect of smoking—repression of breath and hence emotions. Again, those familiar with Reich will know of his claim that cancer and heart disease are, at root, caused by crippled emotions.1 Maybe those millions of smokers who don’t get cancer just have less stressful lives, or never had severe emotional problems in the first place. Of course, emotional instability may be a prime cause for starting smoking, because of its short-term effects of easing tides of feeling. So smoking may not necessarily be a sole cause of any disease, it may be just pulled into the equation by the real causes.

If you don’t want to give up smoking, don’t. Enjoy it. You’ll cause more damage if you punish yourself for not giving up.

If you want to, and have maybe tried before and failed, realizing the connections I’ve made above may just help. Knowing that stopping smoking releases previously suppressed emotions, try to use this release for self-development. See smoking to be a demon intent on depleting your natural streams of fresh psycho-biological energy. Plunge yourself into an integrative practice you’ve always wanted to use, but have never got round to before, whether it’s based on ritual, dreams, therapy, meditation, or just plain living life.

Go carefully, but relish the purity of the emotions, be they ‘good’ or ‘bad’. You soon realize that there aren’t really any ‘bad’ emotions—the whole spectrum is necessary to life; anger, joy, fear, love, sadness… Feel grateful for the experience as they rush through your body, affirming your life and vitality.

Take it from Blake: "Energy is the only life… Energy is Eternal Delight."

Of all the stuff I’ve written, ‘The Smoke Demon’ probably got the most positive feedback, from countless people who thought I’d touched on something no one else had expressed, but that they’d sensed, and not been able to put their finger on. I suppose there’s no greater compliment for a writer.

My ego deflated quickly, though, when they caught me puffing away at a roll-up. Yes; 8 months after I "successfully" quit smoking, as described above, I started again. You know, my woman left me, blah blah blah. Of course I made a lot of the fact that I’d built myself a little get-out clause into the article: "If you don’t want to give up smoking, don’t. Enjoy it." Which can be deftly twisted to also mean: "If you want to start again, go for it!"

The following 3 years were peppered by ever more attempts at giving up, but the weight of having done it, then failing, was too much. One summer I coughed some blood. And carried on smoking. I would wake up in the night unable to breathe. Then have a roll-up first thing in the morning, before getting out of bed. Can anyone say "self-destruction"?

For most of 1998-99, I plotted my escape from urban life in Yorkshire, to go and live somewhere in the west of Ireland, or to go travelling in Australia. Some big shift, away from Tobacco Culture, where I could make the break.

In the summer of 1999 a friend in London emailed me and asked if I wanted a job where he was working, building websites. It seemed crazy, to move to the Big Smoke… But after 2 days of literally pacing up and down, it seemed crazily right, and two weeks later I was living and working in London.

Naturally, having some spare cash, I decided to go a check out something I’d always considered: acupuncture. Nearly every person I’d met hitching who had given up smoking had used it. Well, it wasn’t easy-going, but I’ve not smoked since that course of Chinese needles in 1999.

Of course it’s hard to pin something like this down. It wasn’t just the acupuncture. That was the right thing at the right time. But the right time came after literally years of total despair about the issue, and—all through those countless, dismal, failed attempts at quitting—not even the concept of quitting for good being a possible reality.

All that despair was… preparation.

Yes, changing your external circumstances is a golden chance for inner change, with much more potential than many people credit it with. But, in the end: PERSISTENCE IS ALL.