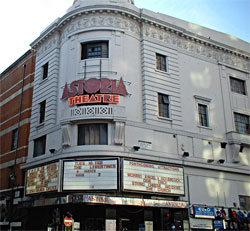 Modern city dwellers are used to the constant presence, here and there, of gaps in the architecture as old buildings are torn down and new ones are built. Still, when the building in question harbours potent (if hoary) memories of formative experiences, turning the corner to see air, nothing, in its place is an unusual ontological shock.

I got that the other day when I walked from Holborn to Oxford Street and, just passing Centre Point near Tottenham Court Road, stopped sharply in astonishment to see that the London Astoria—and the whole block of buildings it was part of, including the Dionysus chip shop I was heading for—was gone. At first it seemed to just register as something taken-for-granted and familiar suddenly vanished, a simple upsetting of the habitual norm. Then, as I stood looking incredulously at the empty space that filled what was once a living place, all those old gigs started bubbling up…

After I passed my driving test, I would fill my red Mini with friends and we’d pile down the A1 to London to see bands. 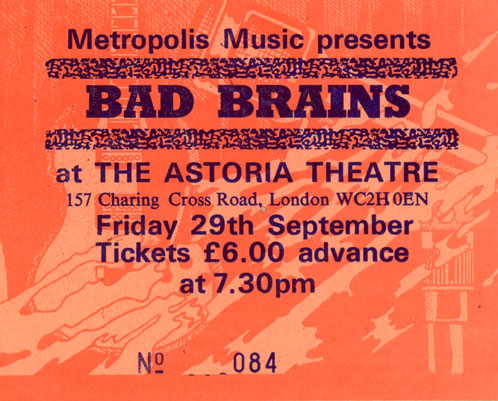 The first was Bad Brains, the legendary Washington DC hardcore punk rastas. They were past their heyday of course, but it was stupidly exciting. We bunked off school on the Friday afternoon and hit London rush hour around 5.30pm. This was about a week after I’d passed my driving test, and I’d never driven in a city before. Ha! That rush very much set me up for the gig. Before the band even came on, a knife fight rolled past us like one of those cartoon clouds of dust with arms and legs sticking out. The band were stunning, and the mosh pit was the entire venue (or so it seemed). They did a curt set, and when they refused to come on for an encore, the audience started tearing the stage apart. YouTube has a snippet of them doing Re-Ignition at the gig. 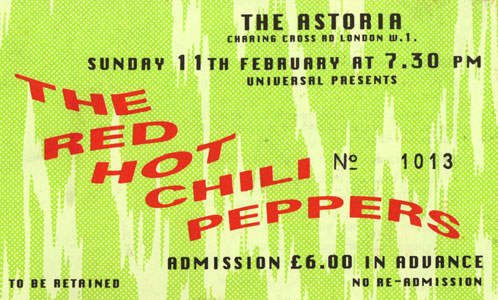 I’d missed the tour of the Chili Peppers album that got me into them, The Uplift Mofo Party Plan, so I sadly missed guitarist Hillel Slovak, who died soon after. But his eventual replacement for the Mother’s Milk tour was a fresh-faced 19 year old called John Frusciante. It’s odd looking back now they’re a stadium band and he’s (rightly) regarded as one of the best guitarists in the world (I wholeheartedly recommend his recent solo stuff). I remember him gyrating with insane grace all the way through Nevermind, his feet rooted to the spot and his hips tracing a blur of a circle and his guitar spinning us all around. 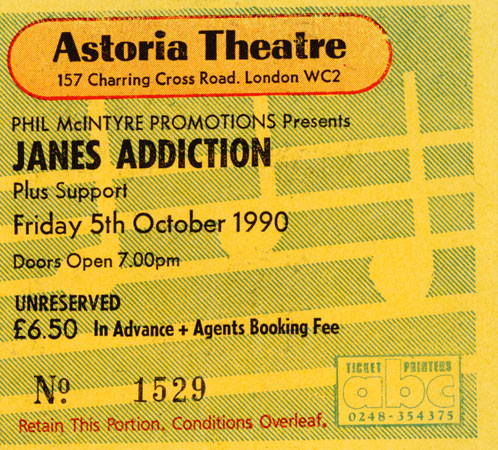 Another band I’d missed before, on the Nothing’s Shocking tour. By all accounts Perry Farrell was less smack-addled and the band tensions were creatively frictious then, whereas this tour saw some shambolic playing and mundane chaos creeping in. Still, it was a frenzied spectacle, with a fantastically diverse, druggy and vibrant crowd. I think it was only when I caught them at Brixton Academy in 1991 that they had their full Ritual de lo Habitual stage set, with Farrell’s sculpture of him in bed with his two ladies, adorned with Santerian paraphernalia. But the epic centrepieces of this album, Three Days and Then She Did, conjured up enough exotic and sensual riots of energy on their own at the Astoria that night.

I’ve only been to the Astoria sporadically in the years since these early gigs, but they were more than enough. I’m sure I’ll think of them every time I walk past that space, even as it transforms into a Crossrail station…