I recently moved after living for five or six years near Archway in north London. Archway was always a bit of an oxymoron in the London landscape: a nondescript landmark. An important travel intersection in the north, it seemed a bit shabby next to its neighbour Highgate, and the more chic overspill from Camden to the south. It was always marked in my mind by the large black unused office tower sat astride the tube station, like some alien monolith which has long since stopped radiating anything.

Over the past few years, Archway inexorably fell to the feverish and never-ending wave of gentrification that grips London. Coffee shops poured in. Starbucks supplanted the thriving Irish pub on the corner. We even saw Forks and Corks, the deli and wine shop which had been serving the ultra-rich on nearby Swain’s Lane, relocate underneath the black tower — a dead zone of pay-day loan shops and the almost dormant library.

Last time I looked, though, this deli relocation had folded. I think they moved too early, as they were clearly angling to pick up business from the soon-to-be tenants of the black tower — which has, of course, been turned into trendy flats.

Before I left, while the renovation of the building necessitated the usual hoardings covered in aspirational nonsense, I took a few photos to capture something I noticed and then couldn’t help dwelling on. 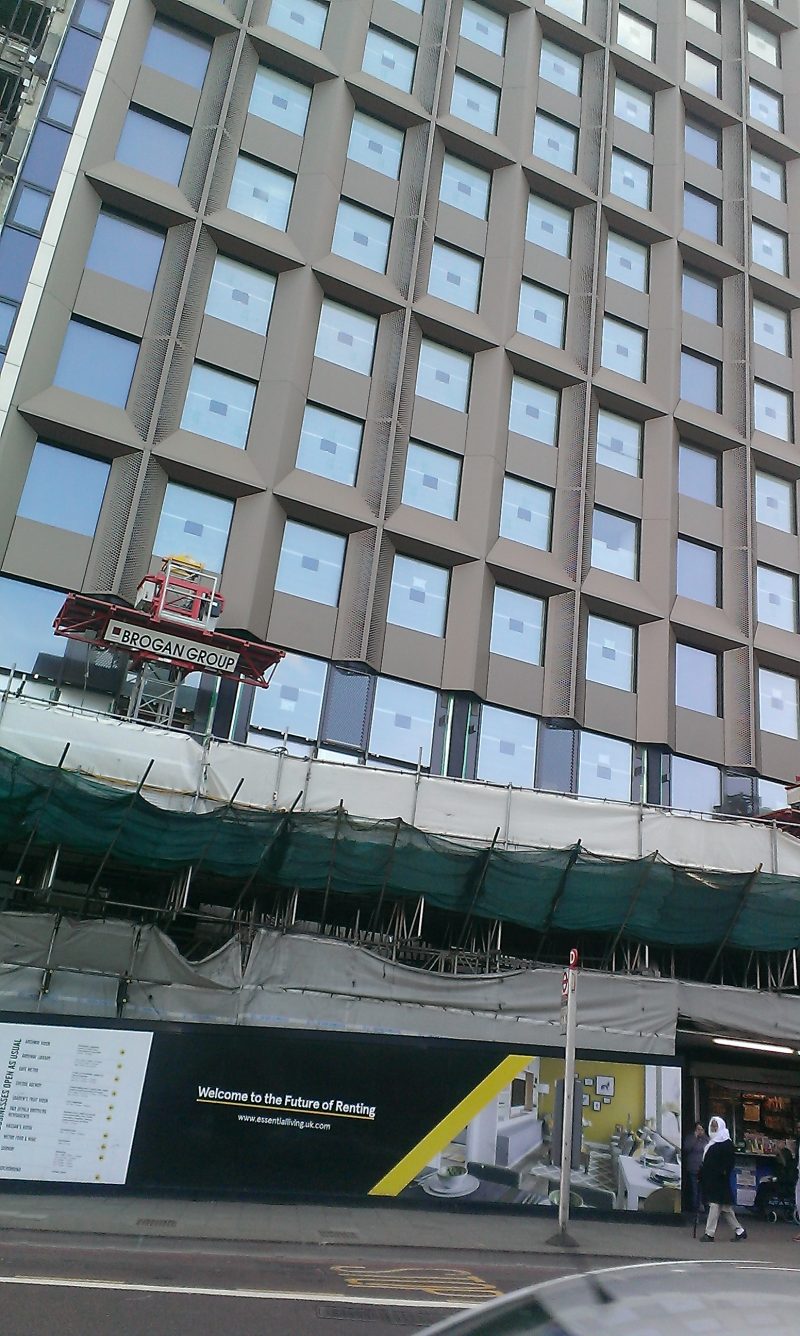 ‘Welcome to the Future of Renting’. And there’s the future of living rooms to the right. Bright, modern, clean, etc. Tasteful but a bit bold. Yellow wall, white flowers, black-and-white-striped cushions. 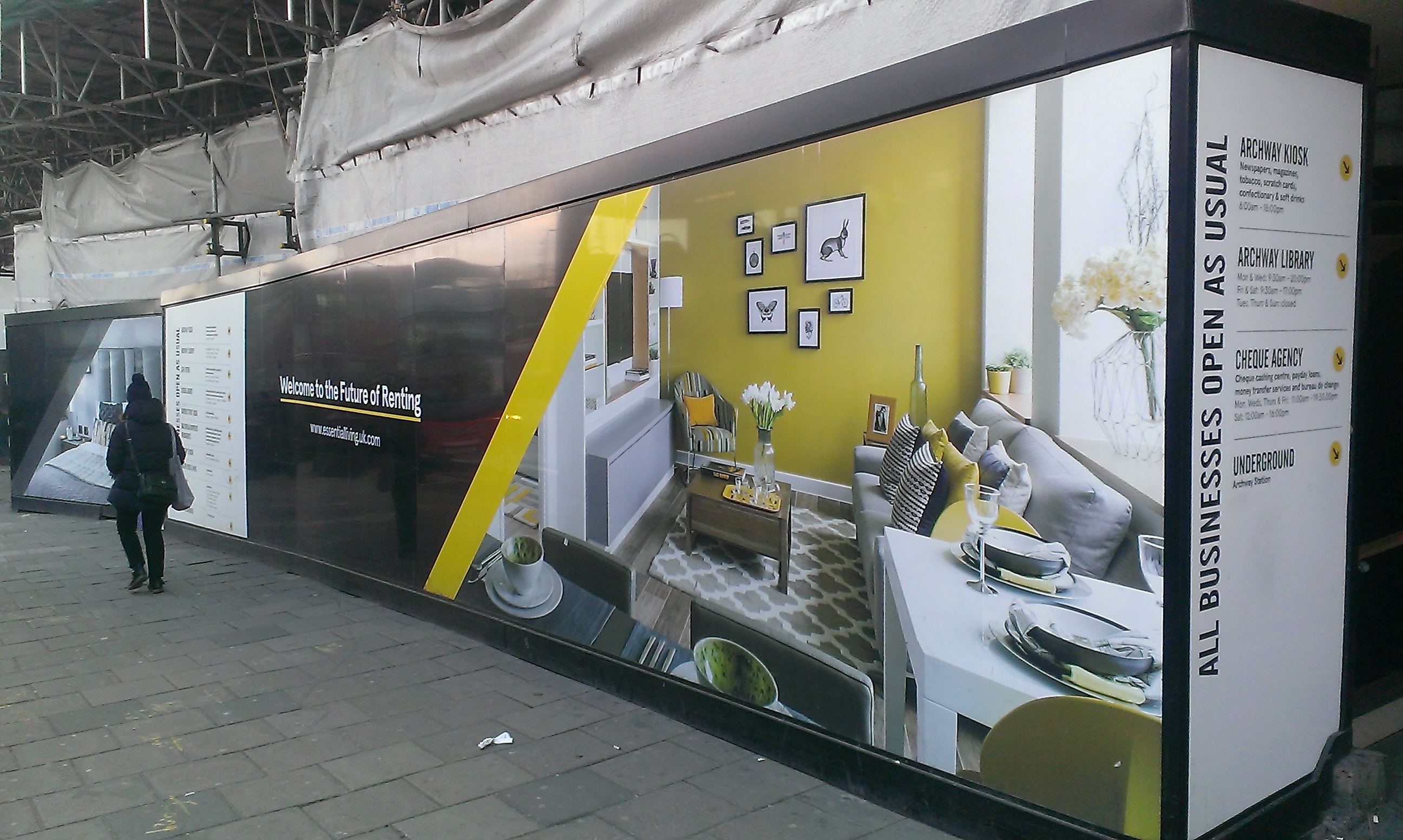 Once you get a bit closer, you can see that the coffee table has, like any coffee table, a book lying on it, book and table mutually justifying each other. What is it? You can see it’s been chosen to co-ordinate with the bright yellow and black-and-white elements in the room. But what are they reading, these pioneers who are exploring the Future of Renting in this newly claimed territory? 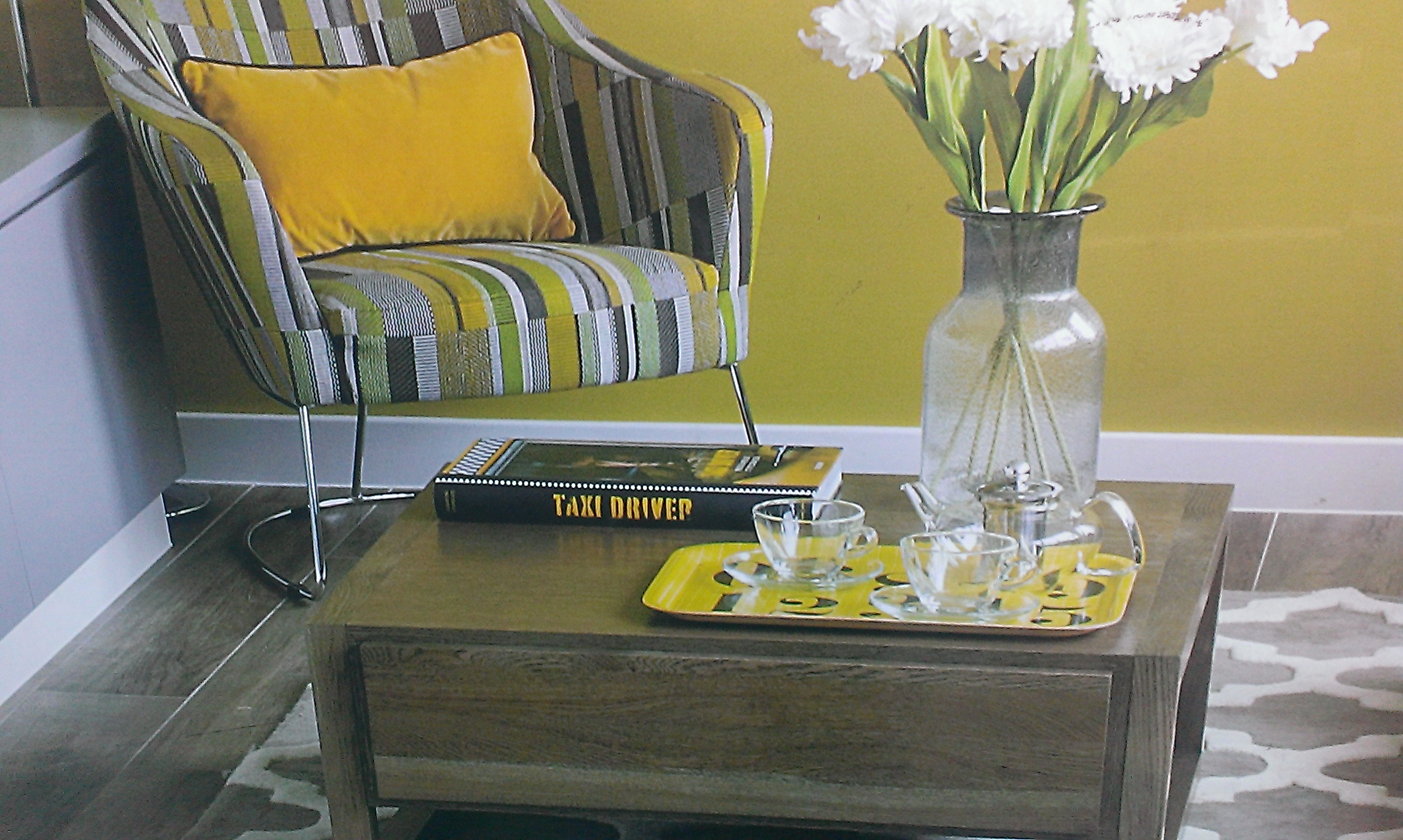 Now, hold on a minute. Didn’t the film’s anti-hero Travis Bickle have some pretty strong, kind of fascist ideas about how to tackle urban decadence and decay?

Need I say? Contemporary Archway isn’t 1970’s Manhattan. Don’t literalise me. But I’m fascinated by the resonance of this book, chosen by a designer to express the vibe of this fantasy colonising of dowdy Archway. There’s plenty of edgy film classics that are ripe for parading an image of your taste. So aside from the superficial colour co-ordination, why pick the one that centres relentlessly on a psychotic misanthrope who muses about wiping out the scum?

My psychological reflexes, which reach for some grotesque extremity to tear through the mundane surface and reveal its hidden sources, naturally want to find in Bickle some kind of repressed shadow. Here, the economic force behind gentrification, at once structurally violent and hard to grasp in its market inevitability, becomes a thick, evasive veil for a disgust-driven class aggression.

In Taxi Driver, Travis Bickle’s aggression is clearly schizoid. Psychosexual malaise, simmering racism, perhaps some post-Vietnam PTSD, alienation from the sordid backwash from the liberatory ’60s, all blend and react to bring Bickle to a sputtering boil. After being rejected by Betsy, his frustration is directed at the presidential candidate she’s campaigning for, Charles Palantine. Failing in an assassination attempt, he then aims at a softer target, the pimp of Iris, a child prostitute he encountered—and this symbolic father figure is successfully murdered.

But in the strange coda, he’s been lauded as a saviour, by the child’s parents and by the media. Is Bickle’s ‘heroism’ just a dramatic instance of a stopped clock telling the right time? Depth psychology would insist on more than a happenstance overlapping. Bickle has the aspect of a demonic other, enacting the ugliness that wider society’s moralism is secluded from by layer upon layer of institutions.

His symbolic relationship to class dynamics is less vivid than to ‘law and order’, but perhaps in his inability to effectively confront Senator Palantine, and his redirection of that rage ‘down’ or ‘across’ to the pimp, we can sense something of the way in which the divide-and-rule dynamics of pyramidal wealth pits those who can afford to aspire against those who can’t. Trapped in the aspirational hamster wheel, those who can afford to, kick down for a temporary upward boost.

Aside from Bickle as shadow, we also have the extent to which this coffee table appearance of the film signals the process of its recuperation. The grimy shocks of the film, which render the shadow reading both possible and potent, have been culturally absorbed enough to let a designer think it’s a symbolically good choice for this fantasy living room. Of course, it’s a book of set photography rather than a copy of the film itself — a sign that the film itself retains a certain power, and perhaps needs to be held at a photographic distance to play its role as an aspirational token. In some ways, the coffee table book here is an extension of Bickle’s twisted fame at the end of the film. Just as his psychotic violence is embraced as heroic by Iris’s staid parents and his community, the film’s disturbing power is embraced as a badge of hip desirability in an urban property boom.

‘Some day a real rain’ll come and wash all the scum off the streets,’ Bickle narrates from his journal. This rain seems decidedly biblical, a purgative apocalyptic flood. The fantasy is nurtured at root by impatience with and shame about one’s own impurities. Bickle projects his impatience and shame out onto the squalor around him. ‘Don’t make no difference to me,’ he says of his willingness to work the worst parts of town — but it makes a big difference. It gives him a very receptive screen on which to project.

Finally, we can note the central theme of Bickle’s life: loneliness. By many accounts, urban improvements since Bickle’s day have done little but transform and juggle the ways we deal with loneliness, rather than address the matter itself. It’s a thin Ballardian drama of contrived community, shadowed by the threat and lure of violent catharsis, which seems to await the tenants of this living room of the near future.