At the end of last year, chance found me moving to southeast London. Crossing the Thames is something Londoners are often reluctant to do, even for a night out, let alone shifting residence. But after 17 years of living in the North, I moved South.

It seems fitting that just after arriving, a book was posted to me out of the blue: now-fellow South London resident Merlin Coverley sent me, in polar solidarity, his new book, South.

It counts as some of the most gratifying feedback for North that I’ve had, in that Merlin was influenced in his research by my work, citing it numerous times and placing a quote from it at the start of the introduction. As Lemuel Johnstone once said, ‘I rather like those books where each chapter begins with a quotation.’ To have one of those quotations be me is a little milestone.

It’s a further pleasure to find that South is a cracking read. It overlaps with (or better, mirrors) some of the terrain I found so fascinating researching North: the imaginative draw of the poles, and the way in which they carried an ancient sense of mystery into the modern world. It’s more of a survey of the modern experience of the South than a full history; but of course, herein lies the most significant imbalance between the hemispheres. The global North has been a far more prolific site of historical unfolding and density. So while the North Celestial Pole accreted myths due to the scope and dominance of the cultures who gazed upon it, the South has figured more as an empty netherworld.

I found especially fascinating the history of the lure of the Mediterranean for northern Europeans. James Hillman has described venturing south as a journey for psychological explorers, beyond cool confines — he mentions both Freud and Jung experiencing minor breakdowns as they travelled to Athens and Rome respectively, on pilgrimages to their intellectual and psychological roots in these ancient centres.1 Coverley tracks the origins of this journey, beginning with the tradition of the Grand Tour that emerged from the Renaissance. Nietzsche acts as a crucial pivot: heading south partly out of the lure of ancient culture, partly as a remedy for his poor health, and partly out of sheer sensation-seeking. There’s a significant gap between Nietzsche’s philosophical love for Mediterranean vitality and the bland sun worship of the twentieth century tourist, but the connection is interesting.

Coverley presses on through the South Seas of Captain Cook and Gauguin (often, as per the Grand Tour, a thinly-disguised form of sex tourism), the ‘Magic South’ of the Beat journeys to Mexico and Borges’ Buenos Aires, and the polar fantasies of Coleridge, Poe, Lovecraft, and hollow earth theories. Finishing with a return to his ever-changing home territory in South London, it’s a fascinating journey. It’s available here. 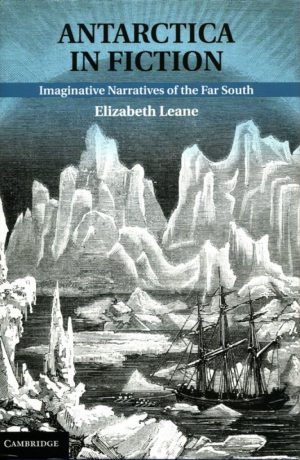 Leane’s essay on Antarctic ‘aliens buried in the ice’ narratives2 was instrumental in my reading of these tales in North, and its shrewd analysis forms the core of a chapter here titled ‘Bodies, Boundaries and the Antarctic Gothic’. Other chapters survey further fantastical southern flights of the imagination, as well as creative accounts of the ‘heroic era’ of Antarctic exploration. The full range of Antarctic fiction is accounted for, a range that has extended so far now as to include a Mills and Boon romance. Another essential tome for appreciated the imaginal lure of the South — available here.