A few weeks ago, after about twelve years of returning to eating meat, I became vegetarian again.

I was vegetarian — with a couple of abortive attempts at veganism, and a general slide towards having a bit of fish every now and then — from the age of 17 until around 34.

As a teenager, I was never a Smiths fan, but the phrase ‘meat is murder’ stuck with me, and my vegetarianism was the result of my mind losing its fight with that phrase. The knee-jerk reaction was to scoff. Murder! That’s a bit much. But then, if I don’t need meat to survive and be healthy, I eat it for pleasure. And what other name can you give to killing for pleasure?

I never developed a visceral distaste for meat. I’ve always loved it. I harboured a sliver of envy for those who felt nauseous when they realised their knife had just been used to cut meat and hadn’t been washed. That sounded like an easy way to be veggie.

Occasionally I might end up in a situation where there was meat which would be discarded if I didn’t eat it, and I always ate it. What an insult, for the animal to die and be thrown away.

A couple of things converged for me to give vegetarianism up in 2006. I went on a long trip around the Mediterranean, and from my experience staying with an ex’s family in Provence, being badgered to eat to-die-for meat dishes, I suspected the trip would be marked by major lapses. 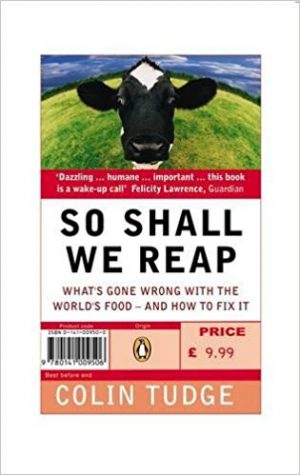 But also at that time I was recommended a book, So Shall We Reap by Colin Tudge, about the history and state of farming. The major contention is that the great traditional cuisines of the world — south Asian, Mediterranean, Mexican — are based on an interlocking pattern of dietary and farming habits, which reflect a long-evolved, optimal balance between plant and animal constituents. Food consists mainly of plants, with a bit of meat — healthy and tasteful, and not the meat overkill of the modern West. This reflects efficient, sustainable farming practices, where animals provide fertiliser and dairy products — and a bit of meat.

To this day I’m not completely convinced by the ‘vegan planet’ arguments (though I’m as irritated by people bashing vegans as most people seem to be irritated by vegans). Tudge made a compelling case that some meat would form part of the most sustainable agricultural system. But mainly, it served as a handy rationalisation for me. I’d start eating a bit of meat, because that’s how things should be if we lived in an ideal balance.

Plus — I loved meat.

Of course I tried to eat organic when I did eat meat, convinced that even if their animal welfare standards weren’t perfect, they were the best on offer.

But in some ways it’s much harder to eat ‘a bit of meat’ than be vegetarian. If the line you shouldn’t cross is constantly being drawn, it can slip around quite wildly.

My vice was always processed pork products: from an animal notoriously sensitive and intelligent, foods which were usually incredibly unhealthy, and unfeasibly delicious.

An interesting moment came last year, when I took part in a traditional peyote ceremony with some indigenous Mexicans. Their custom, after the sun rises following the night’s ceremony, is to kill a lamb as an offering to the spirits, then roast and eat it. No one was obliged to be present at the killing, but for me, it was an obligation as a meat-eater to face what I was involved in. I felt compassion for the creature, but didn’t feel overly revolted or disturbed. As much as anything, I felt — along with the few children who were there — an oddly rapt fascination, especially with the butchering process. I assumed that like me, these kids were generally kind and thoughtful. Why did we lack the visceral repugnance which some vegetarians feel even at the thought of specks of meat juice on a knife? I guess hundreds of thousands of years of killing and eating animals to live sometimes counts for a lot.

So why the return to vegetarianism? There’s a certain selfishness in the fact that the trigger wasn’t the mounting evidence of meat’s disproportionate contribution to ecological problems, nor the rarely-absent ambient guilt of taking part in killing for pleasure. These pressures acted to minimise my meat consumption, and they were probably the bulk of the straws on the camel’s back. But they weren’t the one that broke it.

There’s a friend I’ve been sharing a lot of psychedelic exploration with recently, and he said something about his own experiences. He felt that when you get to the far reaches of hyperspace, gentleness is as essential as courage for navigating successfully — and it won’t do to be psychically tarnished with the connection to the infliction of suffering which meat-eating implies.

It’s the only thing I’ve known him be even vaguely moralistic about. He has strong Buddhist leanings, but he’s certainly not one for following dogma. I trust his stance on meat is from the heart. He did once say, on seeing some of my bacon, that it was like having a slice of a child’s face in your fridge — but it was matter-of-fact expression for him rather than a hectoring guilt trip.

I could sense myself questioning deeper, prompted by these nudges. But there’s also a dismissive knee-jerk pushback against such harsh criticisms, even if they’re not intended as being pointed.

But one morning I was pondering what he said about hyperspace, in that post-sleep haze where new perspectives easily emerge. You see, one of the most significant aspects of hitting my 40s for me has been the almost complete atrophy of my dreams. They were always a deeply important part of my life, but in my mid-late 30s they dwindled, and during my 40s I nearly ceased having them at all (or remembering them — it makes little difference). I used to fill at least a whole A5 notebook with dreams in a year, but the most recent notebook covered the last six years, with many pages to spare.

Well, I say dreams were always a deeply important part of my life, but actually they only really started in my late teens. I only remember about three or four dreams from before I was 17.

And… if my dreams started dwindling in my mid-late 30s… didn’t that coincide with me starting to eat meat again?

The connection my friend had made between vegetarianism and visionary experience suddenly revealed to me, for the first time, an utterly obvious correlation between two of the most important patterns in my life.

Was there a causative connection too? A quick web search (and a few conversations at parties) told me that if there was, it may be something peculiar to my own metabolism (or karma). Apart from a lot of vague Hindu or Buddhist things about vegetarianism as part of the correct spiritual path, I’ve yet to find anyone talking specifically about a correlation between meat-eating and lack of dreams. And I’ve spoken to plenty of people who eat meat and dream fine.

Given that, the easiest course might be to assume correlation but not causation, and leave it be. But that doesn’t seem very scientific. Experimentation is surely in order.

I know that to really see what the situation is, given the years-long slide towards absence of dreams after starting to eat meat again, I’ll have to stay veggie for a year or two at least. But actually, I’m positive I’ve already noticed a difference. More dreams, and more interesting dreams. It bodes well.

And there’s no denying it feels great to be free of that ambient nagging guilt — regarding the murder thing, and increasingly regarding meat’s vast ecological impact. Guilt’s no good. Either stop feeling guilty or stop doing the thing making you feel guilty. Stubborn facts prevented me completely quashing the actual guilt, so there’s one option left.

Thinking about the dreams thing which prompted this switch, I suspect my ethics were tired, and were looking for something to hitch a ride with.

I retain my Tudge-inspired reservations about the idea that a completely vegan planet is viable. But given the urgency of collectively changing our ecological ways, and the appalling state of the modern meat industry, my idea that ‘eating a bit of meat’ is good because it mirrors an ideal general situation seems hollow. It was always more a rationalisation for momentary pleasures than anything else.

It’s odd how it took a chance revelation about what seems to be my idiosyncratic relationship between meat-eating and dreams to burst my bubble of rationalisation.

I wonder what will burst other people’s bubbles?