We just lost a great explorer, a wonderful writer, one of the most important chroniclers of the mind’s inner treasures and its fertile congress with the plant world. He had a true rascal’s twinkle in his eye and deep, bodhisattvic compassion. He will be missed, and celebrated — a joyfully knowing presence in our moments of poetic ecstasy, a warmth strong enough to stand shoulder-to-shoulder with bitter world-weariness.

I first became aware of Dale at the World Psychedelic Forum in Basel in 2008. My friends who knew him said he was a speaker to catch, and they weren’t wrong. His talk was titled ‘The Mythopoetic Roots of Psychedelic Practice in the Western Tradition’.

He paced back and forth, his delivery measured and careful. But this was no timid circumspection. His slow pace tried to give space to the spontaneous, to create deeper spaces for his risk-taking to dive into. At the time I was getting more and more into James Hillman, whose fidelity to the ‘Western tradition’ (not to mention his sobriety) is both edifying and frustrating. Dale rooted around in the same ancient Greek soil as Hillman, but also branched out into Native American shamanic conceptions of ‘soul’, and traces of intoxicated wisdom submerged in Western tradition. I was hooked. 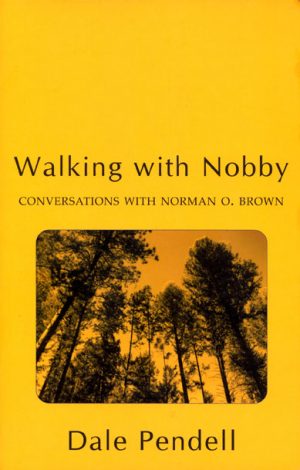 Dale quoted Norman O. Brown in his talk, one of my biggest formative influences. Browsing a bookstall just after the talk, it was a delight to find a new book I’d been looking forward to, a collection of conversations with this enigmatic classics professor who had such an impact on the thought of the ’60s counterculture. Of course the person who’d conversed with Brown was none other than Dale Pendell. Realising that Dale had been a pupil and friend of Brown added another dimension to discovering him — not just an exciting new thinker for me, but also a thread of connection to my sense of lineage.

At the Basel event Dale also did a kind of informal Q&A in the foyer, a small bunch of people clustered around him as he fielded fascinating and sometimes intense queries. He acknowledged that something about him — probably the way he exuded a sense of both wisdom and kindness — often brought raw and desperate people to him, people struggling in the psyche’s difficult eddies and abysses. Here, one woman spoke of her lack of direction, feeling lost, and she burst out crying halfway through. Advising the practice of magic in such a situation might seem… ill-advised. But Dale did so without hesitation, in a way that seemed effortlessly appropriate, transcending magic’s demonised baggage.

Maybe try some of this magic stuff? Leaving a little flower offering, or tobacco offering at four cardinal points, or by your door every day. It doesn’t take much, some of the old ones said, to push the world over into the right direction. It just needs a little help, from you. … Just leave a little offering; something that makes the world a little more beautiful. If we can get out without making the world worse, we have succeeded. That’s all we need to do, is find a way not to make things worse. That’s good enough. Add a little bit of beauty someplace. You will see. It is OK to be in this state; it’s a very good place. A very good place.

A little later, he condensed this perspective, this merging of magic, healing, and aesthetic practice:

And if magical thinking goes against your grain because you’re educated, and you don’t want to be superstitious, look at it as art, use aesthetic principles. Look at it as art and theatre, and you can do the same thing that way.

Over the years, this take has stuck in my mind, and functioned as one of the most profound catalysts for opening and deepening magical practice that I know. Superficially, it seemed like a very superficial and evasive take on occultism. Coming from Dale, its pragmatic playfulness had heft — a very potent combination.

I recorded and transcribed this discussion, and kept in touch with Dale. I ended up doing his website for him. He was always gracious and supportive.

The last time I saw him was at Breaking Convention 2015 in Greenwich. He’d had a serious run-in with cancer, and been saved thanks to a brave liver donor. He was still kind of recovering, but delivered a beautiful rambling talk. I felt I didn’t spend enough time with him, due to the hectic whirlwind of the conference, which I regretted. Of course stuff like this gains some extra bite once someone dies. Death sharpens the teeth of regret. 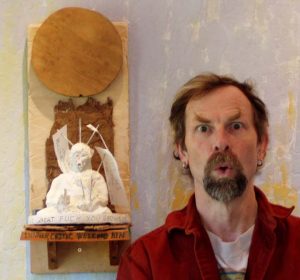 This makes me think of Dale’s magical personification (or useful demonisation) of his Inner Critic. He made a shrine to it, a nasty ape-like being giving the finger, aka ‘The Great Fuck-You Bodhisattva’. It’s embedded with nails, with notes pierced on them.

The notes on the nails say things like ‘Don’t make that call,’ or ‘They won’t like it,’ or ‘They’re just SAYING they like it.’ Stuff like that. The trick is to Hear it, separate it out, write it on a piece of paper, stick it on a nail, light a stick of incense, and pick up the phone or mail off the submission or pick up your brushes or your pen or your tip toes or your guitar or WHATEVER BABY and kick some ass.

The contrast between Dale’s image — the daring pioneer of botanical hyperspaces, sexual abandonment, and general Beat freewheeling — and his sincere testimony of his harsh and prolific Inner Critic was always an ongoing lesson in the complexity of personality, and the potentials that open up when you learn to confront and accept yourself. Even, or especially, the part of you that hates yourself.

Cancer returned, and Dale began writing ‘Pharmako/Thanatos’ posts on his blog. His magnum opus is the trilogy Pharmako/Poeia, Pharmako/Dynamis, and Pharmako/Gnosis, a sprawling, multi-faceted investigation of psychoactive substances both renowned and obscure. Dale famously experimented with each of the many substances as part of his research, and the Thanatos posts — dispatches from the final stretch of the tunnel we’re all travelling down — were a final testimony to his commitment, to speak from experience, and to validate experience through language.

‘The Inner Critic has been very active also,’ he wrote last October.

Merely because you are facing mortality doesn’t mean that the Critic will leave you alone: he will accompany you to the end. That is, at the top of the thirteen steps up to the gallows he will pause, look around, and say ‘Is this all the crowd you could draw?’