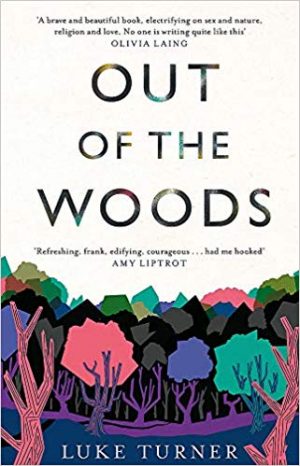 At the launch event at London Review Bookshop, Olivia Laing introduced Luke Turner’s Out of the Woods with reference to the recent surge of nature writing. I’m out of most literary loops; when it comes to nature writing, I’ve only just caught up with one of the genre’s masterpieces, J.A. Baker’s The Peregrine. In any case, Laing suggested that what stood out about Luke’s debut is that fact that it dealt forthrightly with something curiously missing from most nature writing: human sexuality.

Luke quickly affirmed the oddity of this. Even aside from very basic associations between nature and sexuality, sex’s absence from nature writing is strange because historically, this is where it very often happened. As Luke put it, if you’re living in the country and you’ve met a new lover, better sneak off into the forest than try to get it on listening to granny coughing her lungs up in the communal bedroom corner.

What’s more, as Out of the Woods‘ frank account of the author’s coming to terms with his bisexuality demonstrates, patches of nature entwined with modern urban areas are frequently sites of furtive and thrilling encounters which the participants need to hide from society’s often harshly frowning gaze.

Between these two insights about the importance of natural settings for sexuality (and vice versa), I was immediately fascinated — a fascination which was sustained from Luke’s enthused and witty ramblings at the launch, all the way through the lucid and captivating prose of this wonderful book.

Luke seamlessly weaves together intensely personal recollections, excavations of his family tree, and snippets of anthropology and local history, all against the backdrop of a fraught recent relationship breakdown which finds him adrift in northeast London, trying to find bearings among the twisted pollarded trees of Epping Forest. Memories of sexual awakening and abuse gnaw at his uprooted psyche as he struggles to integrate the confusion stemming from both our culture’s problems with accepting non-binary sexuality, and his family’s deep religiosity.

His familial struggles go beyond the simple conflict between repressive Christianity and modern liberation, though, since his parents’ Methodism cleaves more to the genuine Christianity of Jesus’ love for the outcast than to the standard Old Testament excuses for habitual, unquestioned prejudice. The tumultuous but eventually open-hearted navigation of his relationship to his religious inheritance is just one of many aspects of this journey which undermine simplistic modern antagonisms.

There’s plenty of magical release here, but the naive idea of stepping into untainted nature as a clean break from the complex tangles of civilisation is thoroughly dismantled. The dark shadow of this idea of nature as a place of innocent abandon looms, of course. Epping Forest’s reputation for sheltering brutal murders and desperate suicides haunts Luke’s attempts to find solace among the trees; but this never collapses into a binary where innocence flips into the presence of ‘evil’. Instead, there is a persistent attempt to shed preconceptions, and find and accept in nature — and in himself — whatever is there. ‘What animal knows no fear? We were never at one with nature in some placid coexistence, but in unconscious acknowledgement that fear is itself part of the balance.’1

The fact that nature doesn’t care whether we, as individuals, live or die, is often imaged as a heartlessness that risks reflecting all-too-human callousness. Luke treads carefully in this sometimes perilous realm of perception, and ultimately touches on the real release contained in this indifference. This especially applies to sexuality. Since learning from Bruce Bagemihl’s Biological Exuberance2 that a bewildering array of non-reproductive sexualities are found in many species, but that aggressive prejudices such as homophobia are common in just one (us), I’ve never tired of reflecting on what this says about human attitudes to what is ‘natural’ in sexual expression. The woods aren’t just an escape from the judgements of civilisation; they’re a positive embrace by a realm which, in not caring, provides an important kind of sanctuary which goes beyond personalised cradling.

What struck me most, beyond the discovery of release and sanctuary in nature’s capacious arms, was the honest documentation of the fumbling missteps. It’s always tempting to edit out the branches of your path of self-discovery which lead to humbling disappointment, to just present the dramatic highlights. But Luke admirably foregrounds these awkward dead-ends as being an important part of the whole — in human behaviour as much as in quests to discover the spirit of natural landscapes.

A return to the Calder Valley, the site of Luke’s idyllic childhood, ends in frustrated disappointment at Stoodley Pike, as he realises that time has irrevocably splintered his relationship to this place. ‘As rocks become hewn stones, we move from our place of quarrying and will never quite fit again.’3 He finds profound, healing connection to other aspects of his past, but the acceptance of loss and irretrievable memories is also candidly accommodated.

Just as I was finishing reading this riveting tale, I went to see folk singer Shirley Collins at the Roundhouse in Camden. It was no surprise to spot Luke there too. When the band started playing, I noticed former Coil member Ossian Brown accompanying Shirley on the hurdy-gurdy, and I thought of the many connections with the post-Throbbing Gristle musical underground which snake through Luke’s tale (Genesis P-Orridge went to the same school on the edge of Epping Forest as Luke’s father, and Cosey Fanni Tutti once did a porn shoot in these woods). Suddenly the warm, dark music immersed me in the imagination of an England so different from the narrow, uptight image we currently seem to be condemned to wrestle with.

There are struggles and confusion in this other England, to be sure. But it’s sustained by being rooted in the sanctuary of nature’s ‘not caring’: a persistent, non-naive effort to ground our modern world in engagement with trees, animals, plants and rocks in a way that allows these beings to undermine our conceptions of them, and inspires us to accept all the knots and strange processes at work in our own particular nature. My imagination identified this splendid book as a fresh and valuable new branch of England’s ‘hidden reverse’, feeding hope of wiser, more capacious times.