Psychoanalyst Sándor Ferenczi once said, “Pure intelligence is … in principle madness.” In the face of this acute insight into the overriding quality involved in insanity, argues Louis Sass, we have persisted in falsely opposing reason and madness.

The standard conceptions, whether psychoanalytic or psychiatric, have nearly always presupposed the West’s enduring equation of sanity with reason, insanity with passion and error — as if madness were necessarily a kind of stupidity or dementia or, in the terms of Plato’s famous metaphor, a case of the wild horse of instinct overwhelming the charioteer’s conscious control.

While taking great care to stress that this provocative book isn’t proposing a comprehensive new theory of schizophrenia, merely some important qualifications to standard models, Sass makes his case very persuasively that such entrenched views are frequently a distortion of the reality of schizophrenic experience. He sees the tendency to model schizophrenia as “regressive”, an illness that dangerously undoes the ego with eruptions of pre-rational “infantile” mental forces, in both orthodox psychiatry and radical “antipsychiatry” (e.g. the works of Deleuze & Guattari and R. D. Laing). He merely sees the latter as making “the romantic move of valorizing rather than pathologizing these supposedly primitive and uncontrolled conditions.” Many actual mental phenomenon in schizophrenia, he argues, are actually best understood as hyper-intensifications of the very qualities of consciousness lacking in infants: abstraction, disengagement from the body, and the distancing process of awareness of awareness.

He takes the memoirs of Daniel Paul Schreber, one of psychiatry’s “ur-cases”, as his key point of departure, and deftly weaves parallels between the perceptions of Schreber (and other schizophrenics) and the philosophical observations of Ludwig Wittgenstein. Crassly put, he sees the philosophical dead-ends (such as solipsism) that Wittgenstein tried to expose and discard, as lived through by the schizophrenic. The contradictions of the patient who believes he is the only real person (and then feels it important to convince other supposedly “unreal” people of the fact), are seen as the unfortunate existential cul-de-sacs of someone who has allowed bad philosophy free reign.

One of the book’s strongest features is its phenomenological leanings — Sass’s efforts to place very close attention to the actualities of schizophrenic experience, aside from habitual judgements about it. For instance, the supposed literalism or “misplaced concreteness” of schizophrenic perception — the classic “hallucinations” where contents of the psyche are actually seen running around in the world — is often, Sass argues, more a literalism of psychiatric interpretation. That is, clinicians pay too little attention to the nuances of schizophrenic’s reports, and take them too often at face value. Drawing on Schreber’s writings and other reports, he clearly demonstrates how much reflexive awareness there actually is in schizophrenia; patient’s descriptions of their experiences are frequently laced with self-mocking irony, and a painfully acute cognizance of the absurdity of their perceptions. 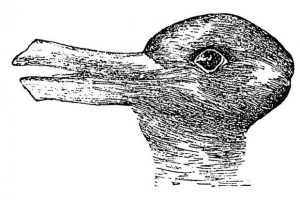 Further, Sass does an excellent job of plunging into the “atmosphere” of schizophrenic experience. Wittgenstein’s fascination with “seeing-as”, where the exact same physical perception can be “seen” as two different things (through shifting mental perspective — check out the famed duck/rabbit drawing), is brought to bear on schizophrenic “hallucinations”. The difference between Schreber seeing himself with female breasts and Schreber seeing himself as if he had female breasts may seem subtle, but Sass shows that it’s important for understanding schizophrenia from the inside-out, and divining the roots of the illness.

Other “mood” hallucinations, such as “uncanny particularity” (where objects “may seem tremendously specific and meaningful, but without the patient being able to explain why”), are detailed with a highly evocative sensitivity. Indeed, I wouldn’t recommend reading this book if you’re feeling mentally fragile! I recognized a disturbing amount of the perceptions described, and their descriptions — entirely framed by the context of mental illness — certainly tickled a few of my skittish fears of mental instability. Granted, most of these perceptions happened in various states of chemical intoxication, which makes me appreciate one of Terence McKenna’s many arguments for psychedelics: who wants to trigger this shit without drugs? Surely doing it “on the natch” is cause for concern?

Well, McKenna had his tongue in his cheek a lot of the time, and I do think most of these “schizophrenic” perceptions are a natural — albeit grossly overemphasized — part of human experience. Proving that I’m probably highly capable of losing my marbles, I often wonder about the self-generating effects of diagnosis. The terms used to label these perceptions — “uncanny particularity”, “phantom concreteness”, “flattening of affect” — often seem to me to be charged with the aura of that which they describe. Of course it’s natural for words to accumulate these resonances from what they refer to, but there’s something else here, some negative charge from the “illness” context for them. I’m far from arguing that schizophrenia only exists in negative terminology. However, Sass’s arguments seems to suggest a reason why these terms might be slightly more unnerving than average “negative” words. If schizophrenia is an illness of hyper-rationality, of grossly distorted mental abstraction, perhaps the inhuman tendencies of the over-rational and abstracted world of Western psychiatry itself are invoked in these clinical terms? I digress…

This is a brilliantly crafted and fascinating book, recommended to anyone interested in philosophy, psychopathology, and their all-too-infrequently examined intersections. For me, it’s a revealing confirmation of the general perils of our tradition’s emphasis on reason, awareness and light. Countering the valorizing of schizophrenia as a “Dionysian illness”, Sass argues that it is usually more Apollonian:

… not an overwhelming by but detachment from the instinctual sources of vitality, not immersion in the sensory surround but disengagement from a derealized external world, not stuporous waning of awareness but hypertrophy of consciousness and the conceptual life. … a matter of the mind’s perverse triumph over the body, the emotions, and the external world.